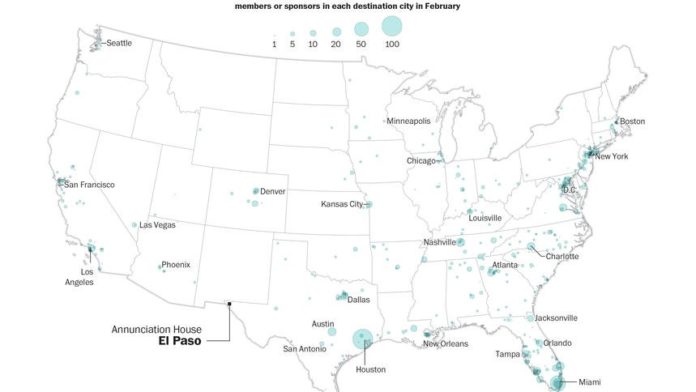 Where migrants go after release into the United States

Central American families are arriving at the U.S. southern border in record numbers, pushing unauthorized crossings to a 12-year high. Unlike past migration waves, when most migrants were Mexican laborers who typically headed for Texas, California and other western states, the latest newcomers are fanning out across the United States to reunite with family members.

The U.S. government has not released information on the whereabouts or U.S. destinations of recent migrants. But The Washington Post has obtained exclusive data on the nationality and U.S. destination of one small sample: 1,545 migrants who passed through a shelter run by the El Paso nonprofit Annunciation House in February, about 2 percent of the total number of migrants who crossed into the country that month.

Video: President Trump said April 12 there could be plans to release ‘illegals’ into sanctuary cities, adding he can give states like California an ‘unlimited supply.’ (The Washington Post)

Annunciation House arranges with U.S. authorities to take those released from custody into local shelters and then help them arrange travel to their destinations in the U.S. interior.

The White House has been floating plans to ship migrants to “sanctuary cities” – localities that limit cooperation with federal immigration authorities – and then release them there, trying to retaliate against Democratic lawmakers who have blocked funding for more immigration detention beds. Though authorities have said there is no operational plan in place to do so, President Trump tweeted Friday that such plans are under “strong consideration.”

The Annunciation House data reviewed by The Post – travelers’ country of origin and their destination city after release from immigration custody – shows that migrants headed for cities and towns in 42 states, including many places that are not considered sanctuary cities. Many migrants went to the Southeast and Midwest, regions that were not major immigrant destinations a generation ago.

The migrants who traveled through Annunciation House came from nearly a dozen countries, including four countries that accounted for 95 percent of the monthly total: Guatemala, Honduras, Cuba, and El Salvador. Others came from Mexico, Nicaragua, Brazil, and Ecuador. Four migrants came from Russia and one each came from Venezuela and Iraq.