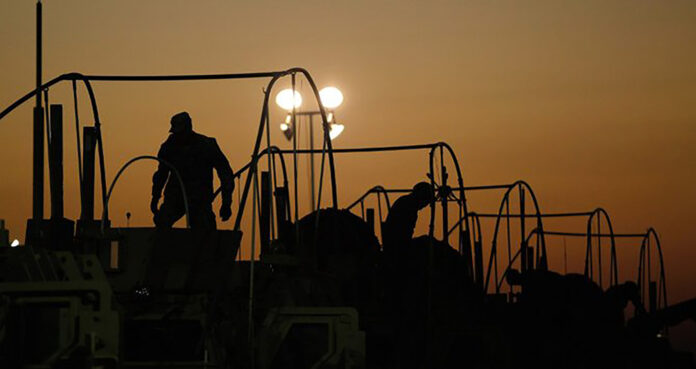 The US military said Tuesday it was investigating a militant claim by a newly formed Iraqi Shiite militant group of a bombing at the Iraq-Kuwait border. A group, called Ashab al-Kahf, issued a statement overnight claiming it destroyed “equipment and vehicles belonging to the American enemy” in a bombing targeting a border crossing south of the Iraqi city of Basra.

It was not immediately clear if there were any US troops in the convoy or if anyone had been injured in the explosion, which went off just before 9 pm Baghdad time (1800 GMT).

Vehicles are regularly loaded with military equipment at the crossing, the sources said, and the cargo is usually loaded or unloaded before entering or exiting Iraq.

Foreign companies are contracted by U.S. forces to provide security in the area, the Iraqi security sources said.

A security source had earlier said that the explosion was caused by an Iraqi Shi’ite Muslim militia targeting a U.S. military base near the crossing by smuggling in an explosive device, and that some staff on the base had been injured. This was later contradicted by other security sources who said a convoy was attacked, not a base.

The U.S. Embassy in Kuwait said it was looking into the matter.

A little known Iraqi Shi’ite militia group by the name of Ashab al-Kahf means “Companions of the Cave” in Arabic, claimed responsibility for the attack and published a video showing an explosion at a distance. It said it was able to destroy US military equipment and large parts of the crossing.

Kuwait has been a staunch US ally since the 1991 Gulf War expelled the occupying Iraqi forces of Saddam Hussein. Today, Kuwait hosts some 13,500 American troops, many at Camp Arifjan south of Kuwait City, which is also home to the forward command of US Army Central.

American troops and contractors sometimes travel by road with equipment and supplies between the two countries.