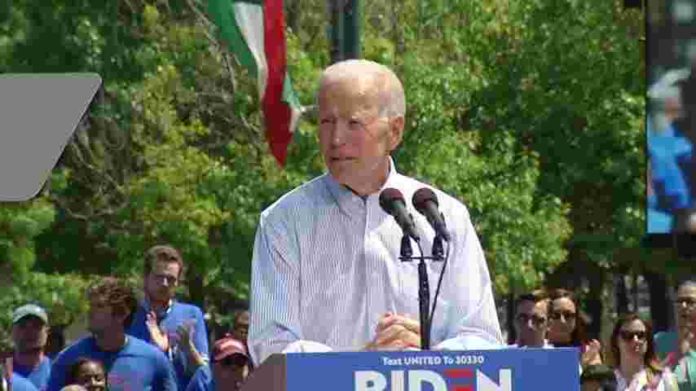 President Donald Trump had Joe Biden on the brain Monday.

During a campaign rally in Montoursville, Penn., Trump repeatedly targeted the former vice president, telling the Keystone State that Biden abandoned it.

“Don’t forget: Biden deserted you,” Trump told the crowd as he was ending his speech. “He left you for another state.”

Biden served as a Delaware senator for over 30 years but was born in Scranton, Penn. The former vice president’s first rally after announcing his presidential bid was in Pittsburgh, and Biden’s campaign headquarters will be in Philadelphia. Biden is making a play for Pennsylvania — a state Trump won in 2016 by less than 1 percentage point.

The president at his Monday rally said he knows the people of Pennsylvania better than Biden, saying they’re “tough,” “strong” and “smart.”

“This guy talks about ‘I know Scranton,'” Trump said of Biden. “Well, I know the places better. He left you for another state and he didn’t take care of you.”

In a head-to-head matchup Biden beats Trump in Pennsylvania, 53 to 42 respectively, according to a Quinnipiac University Poll released last week.

Trump throughout his rally targeted the 2020 presidential field broadly, but on multiple occasions mentioned Biden specifically — once again referring to the former vice president as “Sleepy Joe.” The president referenced two other candidates: South Bend, Ind., Mayor Pete Buttigieg, who he once again called Mad Magazine’s Alfred E. Neuman, and Sen. Bernie Sanders, I-Vt., when he was denouncing Sanders’ Medicare for all proposal.

The president told his supporters that although Biden said he wants to “save the world,” he’s just “going to save every country but ours.”

When he announced he’s running for president, he said it’s because foreign leaders called him up and begged him to do it,” Trump said. “Absolutely. Foreign countries liked him much better, that’s what they want.

“They want Biden, so that China can continue to make $500 million a year and more ripping off the United States,” he added. “They like it