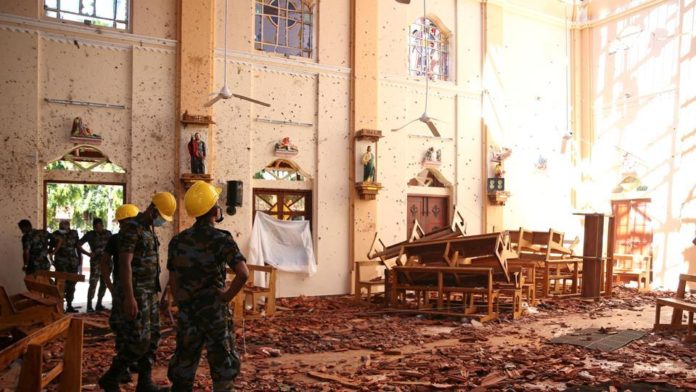 At least 207 people were killed and hundreds more injured in eight blasts that rocked churches and hotels in and just outside Sri Lanka’s capital on Easter Sunday.

Sri Lankan President Maithripala Sirisena will ask for foreign assistance to track international links to a series of suicide bomb at churches and luxury hotels on Easter Sunday that killed 290 people and wounded more than 500, his office said.

“The intelligence reports (indicate) that foreign terrorist organisations are behind the local terrorists. Therefore, the president is to seek the assistance of the foreign countries,” it said in a statement.

The president will also declare a nationwide emergency that will go into effect at midnight on Monday. This measure, which will grant police and the military extensive powers to detain and interrogate without court orders, was in force at various times during the civil war with Tamil separatists.

The Easter Sunday bomb attacks in Sri Lanka were carried out with the help of an international network, cabinet spokesman Rajitha Senaratne said on Monday.

“We do not believe these attacks were carried out by a group of people who were confined to this country,” Senaratne said. “There was an international network without which these attacks could not have succeeded.”

Four Janata Dal (Secular) leaders from Karnataka were killed in Colombo and three others are yet to contact their families after Sunday’s serial blasts in the Sri Lankan capital that killed 290 people, including 5 Indians, and injured more than 500.

The US and Canada have issued travel advisories to their citizens seeking to visit Sri Lanka, citing threats of terrorism, a day after the calm of Easter Sunday was shattered by gruesome bombings targeting the country’s churches and hotels that killed at least 290 people.

According to advisories, travellers should exercise a high degree of caution in Sri Lanka due the current security situation.

The US citizens travelling to or residing in Sri Lanka were advised to enrol in the Department of State’s Smart Traveler Enrollment Program (STEP) in order to receive the latest security updates, the Sunday Times reported.

The Interpol on Monday said it is ready to offer full support to the Sri Lankan authorities in investigating the country’s deadliest terror attack that killed 290 people in a series of eight blasts that tore through churches and luxury hotels in the country.

Interpol Secretary General Jurgen Stock in a Twitter message said, “Interpol strongly condemns the horrific attacks and has offered its full support to the investigation being carried out by national authorities.” Paris-based Interpol is an organisation which facilitates worldwide police cooperation.

Stock said Interpol can deploy an Incident Response Team at the request of a member country to provide on-site support during a crisis situation.

“Our thoughts and prayers are with the families and friends of the victims,” he tweeted

Curfew in Colombo from 8 pm to 4 am

Tourists are scrambling to leave Sri Lanka and hotels are bracing for cancellations after a deadly terrorist attack that killed 290 people targeted foreigners and churchgoers.

Holidaymakers are flocking to the main airport, cutting short their vacations in the wake of coordinated blasts at churches and luxury hotels on Easter Sunday, the worst violence since the end of a civil war a decade ago.

Kishu Gomes, chairman of the Sri Lanka Tourism Development Authority, said he couldn’t give an exact count of the number of people leaving, but it could run into the thousands. Tour operators in India, the biggest source market for visitors to Sri Lanka, are also canceling trips for clients. That would hurt an industry that contributes almost 5 percent to the economy.

The foreigner death toll rose to 39 on Monday, including nationals from India, Portugal, Turkey, the U.K. and the U.S. Authorities haven’t revealed information on who may be responsible for the strikes.

Why Sri Lanka does not trust social media platforms

Battling the spread of hate speech on social media platforms especially Facebook for long, the Sri Lanka government on Sunday once again “temporarily blocked” social media from spreading fake news in the wake of deadly suicide bombings in the island that killed 290 people.

In a brief statement, the Sri Lankan President’s Secretary Udaya Seneviratne said the government has “decided to temporarily block social media sites including Facebook and Instagram in an effort to curb false news reports”.

Sri Lankan authorities on Monday arrested 11 more people, all reportedly members of a Muslim radical group, taking the total number of arrests to 24 as police stepped up the investigation into the multiple blasts that rocked the island nation on Easter Sunday that killed over 290 people.

A string of eight powerful blasts, including suicide attacks, struck churches and luxury hotels frequented by foreigners in Sri Lanka on Easter Sunday, killing over 290 people, including five Indians, and shattering a decade of peace in the island nation since the end of the brutal civil war with the LTTE.

The US State Department said in a revised travel advisory ‘terrorist groups’ were continuing to plot possible attacks in Sri Lanka after 290 people were killed and about 500 wounded in blasts in churches and luxury hotels on Sunday, reported news agency Reuters.

“Terrorists may attack with little or no warning,” it said in the revised warning, which was dated Sunday US time.

Religious and world leaders have condemned a series of blasts in Sri Lanka that killed at least 290 people on Sunday, including dozens of foreigners with British, Dutch and American citizens believed to be among them.

Japan also confirmed one of its citizens was among those killed by the bombs which ripped through high-end hotels and churches holding Easter services.

“I’m shocked to hear that a 7-member team of JDS workers from Karnataka, who were touring Colombo(Sri Lanka), has gone missing after bomb blasts. 2 of them are feared killed. I’m in constant touch with Indian High Commission on reports of those missing,” tweeted Karnataka chief minister HD Kumaraswamy.

Panicked at first, Sri Lankans anxious over what’s to come

Bhanuka Harischandra was running a little late for his meeting Sunday.

As a car carrying him pulled into the back entrance of the luxury Shangri-La Hotel in Sri Lanka’s capital of Colombo, he realized something was wrong.

People were telling him not to come in, it wasn’t safe. Still, the car pulled around to the front of the hotel and Harischandra saw the aftermath of a bombing. People were being evacuated, others were being dragged. Blood and ambulances were everywhere.

“It was panic mode,” Harischandra, a 24-year-old founder of a tech marketing company, said by telephone later in the day. “I didn’t process it for a while.”

He decided to go to the Cinnamon Grand Hotel, where he thought it would be safe. But just after he was dropped at the luxury hotel and about to enter the building, he heard another bomb go off.

Now he was being evacuated. Soot and ash fell on his white sweat shirt.

Possible intel failures to be examined

Police in Sri Lanka say the investigation into the Easter Sunday bombings will examine reports that the intelligence community failed to detect or warn of possible suicide attacks before the violence, reported news agency Associated Press.

The nine bombings of churches, luxury hotels and other sites was Sri Lanka’s deadliest violence since a devastating civil war in the South Asian island nation ended a decade ago. Police spokesman Ruwan Gunasekara said Monday the death toll, which was 207 late Sunday, had risen overnight but the figure wasn’t immediately released.

The toll in a series of eight blasts targeting mostly churches and hotels in Sri Lanka on Sunday has risen to 290, a police spokesman said Monday.

More than 500 people were wounded in the blasts, he added, in the deadliest violence since the end of the country’s long-running civil war a decade ago.

Sri Lanka’s police chief made a nationwide alert 10 days before Sunday’s bomb attacks in the country that suicide bombers planned to hit “prominent churches”, according to the warning seen by AFP.

“A foreign intelligence agency has reported that the NTJ (National Thowheeth Jama’ath) is planning to carry out suicide attacks targeting prominent churches as well as the Indian high commission in Colombo,” said the alert.

Authorities lifted a curfew in the Sri Lanka on Monday, a day after 290 people were killed and about 500 wounded by a string of bombings that tore through churches and luxury hotels on Easter Sunday.

There was still no claim of responsibility for the attacks on two churches and four hotels in and around Colombo, the capital of predominantly Buddhist Sri Lanka, and a third church on the country’s northeast coast.

A government source said President Maithripala Sirisena, who was abroad when the attacks happened, had called a meeting of the National Security Council early on Monday. Prime Minister Ranil Wickremesinghe would attend the meeting, the source said.

Sri Lankan authorities blocked most social media after Easter Sunday attacks killed more than 200 people, with officials saying the temporary move was meant to curtail the spread of false information and ease tensions.

The defense ministry said the shutdown would extend until the government concludes its investigation into the bomb blasts that rocked churches, luxury hotels and other sites.

NetBlocks cautioned that such post-attack blackouts are often ineffective.

“What we’ve seen is that when social media is shut down, it creates a vacuum of information that’s readily exploited by other parties,” said Alp Toker, executive director of the London-based group. “It can add to the sense of fear and can cause panic.”

At least 17 people from eight countries, including three from India, are amongst those who were killed in eight deadly blasts which rocked Sri Lanka on Sunday, said Sri Lankan Foreign Ministry.

The ministry said that 19 foreign nationals injured in the attacks are receiving treatment at Colombo National Hospital.

People from at least eight countries were killed in the series of attacks on churches and hotels in Sri Lanka, including five citizens of Britain, three Indian nationals, three Danes, two each from China and Turkey and one each from Netherlands and Portugal, reported CNN.

The ministry said in a statement earlier that nine foreign nationals were reported missing and that 25 unidentified bodies at the Colombo Judicial Medical Officer’s mortuary were believed to be that of foreigners, reported CNN.

Three Indians were killed in the serial bombings in Sri Lanka on Sunday, external affairs minister Sushma Swaraj said on Twitter. But a woman from Kasargod district in north Kerala who was killed in one of the blasts was not among the three Swaraj named.

“Indian High Commission in Colombo has conveyed that National Hospital has informed them about the death of three Indian nationals. Their names are Laxmi, Narayan Chandrashekhar and Ramesh. We are ascertaining further details,’ the minister tweeted.

A police source told AFP that a “homemade” pipe bomb had been found late Sunday on a road leading towards the main terminal, which remains open with heavy security after Easter Sunday’s deadly bomb attacks.

“It was a homemade bomb, with explosives put into a pipe,” said the source.

Authorities have not made public details on those held after Sunday’s attacks. But a police source told AFP the 13 were detained at two locations in and around Colombo.