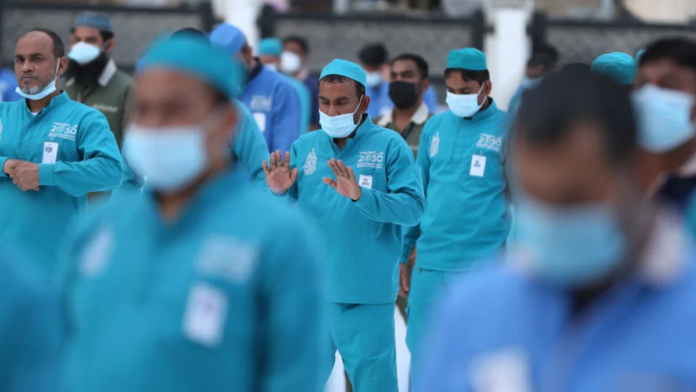 Saudi Arabia will ease foreign workers’ contractual restrictions, including the freedom to change jobs, the kingdom’s deputy minister for human resources has said.

The plans, which will take effect in March 2021, include foreign workers’ right to leave the country without employers’ permission, Abdullah bin Nasser Abuthunain told reporters on Wednesday. The aim is to improve Saudi Arabia’s labour market attractiveness, Abuthunain added.

The Ministry of Human Resource and Social Development said the reforms will allow foreign workers the right to change jobs by transferring their sponsorship from one employer to another, leave and re-enter the country and secure final exit visas without the consent of their employer, which had long been required.

The new so-called “Labour Relation Initiative” will affect approximately 10 million foreign workers in the kingdom, about a third of Saudi Arabia’s total population.

The reforms are part of a broader plan known as Vision 2030 spearheaded by Crown Prince Mohammed bin Salman (MBS) to make the kingdom more attractive to foreign investors, expand the private sector and diversify the kingdom’s oil-dependent economy.