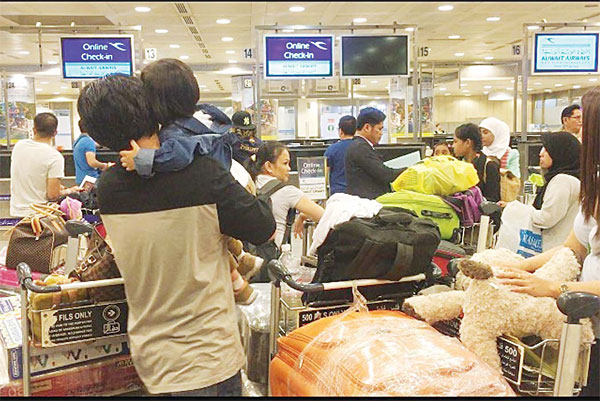 Kuwait has summoned the Philippines’ ambassador for the second time in as many days to protest over “inflammatory comments” he made to a local newspaper.

The Filipino envoy’s remarks, along with the “inappropriate behaviour” of Manila’s diplomatic staff in Kuwait have been deemed a threat to Kuwait’s sovereignty, a spokesperson for the Ministry of Foreign Affairs said on Saturday.

Kuwait had summoned the Filipino ambassador on Friday in connection with scathing remarks by Filipino officials, in addition to misconduct by the Philippines’ diplomatic staff in the country.

News emerged on Wednesday and Thursday in Manila that staff at the Philippines embassy were using diplomatic vans to help Filipina house workers flee their employers. Filipino officials termed the “clandestine” action as “rescue operations” and posted videos showing how they were carried out.

The remarks and the videos prompted Kuwait’s foreign ministry on Friday to summon Ambassador Renato Pedro Villa and hand him two protest notes.

In remarks to two Kuwaiti dailies, Ambassador Villa confirmed the “rescue operations” and said the special rescue team has been operating for more than a month in Kuwait.

The team is made up of seven members and acts whenever there were urgent cases that could not wait for action from the foreign and interior ministries, the ambassador said

Following the operations, the embassy asks the helpers’ sponsors to pay them their financial dues, including the cost of the tickets home, he added.

The remarks were published on Saturday and the foreign ministry again summoned the ambassador and protested the remarks and the inappropriate behaviour by diplomatic staff.

The Ministry of Interior issued a statement, saying it identified “the suspects who are believed to have assisted a Filipina domestic worker in escaping from her sponsor’s home.”

The three suspects and the house worker are all Filipino nationals,” the statement said, adding that Kuwaiti Deputy Prime Minister and Interior Minister Shaikh Khalid Al Jarrah Al Sabah had grave concerns over the incident and that “the full force of law will be used to bring those complicit in the wrongdoing to justice.”

At an impromptu press conference on Saturday afternoon, Ambassador Villa said the embassy did not act alone without local official assistance and that he had been misquoted.

“I would like to clarify a statement attributed to me that ‘we do not need the help of Kuwaiti authorities in extending assistance to our nationals,” Villa was quoted as telling reporters. “The embassy always coordinates with the interior ministry when responding to requests of assistance from our nationals. This is standard procedure and we will continue to do so. All the efforts undertaken in the past weeks are to ensure that we resolve our outstanding issues before the signing of the memorandum of agreement and the upcoming visit of our president.”

Recent reports in Kuwait and the Philippines said that President Rodrigo Duterte might travel to Kuwait before Ramadan to witness the signing of a bilateral agreement to protect Filipino workers in Kuwait.

“I would like to assure that all actions taken by the embassy are intended to support our collective efforts to find solutions to problems we have encountered concerning our workers. In this connection I would like to clarify a statement attributed to me that ‘we do not need the help of Kuwaiti authorities in extending assistance to our nationals’,” he added.

“We will answer the [Kuwaiti foreign] ministry’s concerns and maybe by this week we will send the reply in a letter,” he said with regards to being summoned twice over the weekend.

But while Kuwait is using diplomacy to address the latest thorn in the crisis with the Philippines generated by Manila’s ban on deployment of Filipinos in the northern Arabian Gulf state based on accusations of abuse, Kuwaiti lawmakers have been particularly vociferous as they vented their anger.

MP Talal Al Jalel said that “such acts by diplomatic staff in a country where everyone enjoys security and peace and get their rights are absolutely rejected.”

“If there are abuses, then you should deal with them according to the law, and not according through bullying,” he addressed the embassy.

MP Ali Al Daqbasi, the head of the Kuwait-Philippines friendship committee, was quoted as saying by Kuwaiti daily Al Seyassah that he would not respond to a request to meet with Filipino officials “to protest against abusive and inappropriate behaviour and statements,” and stressed that “there can be no friendship with those who violate the laws and regulations of the country.”