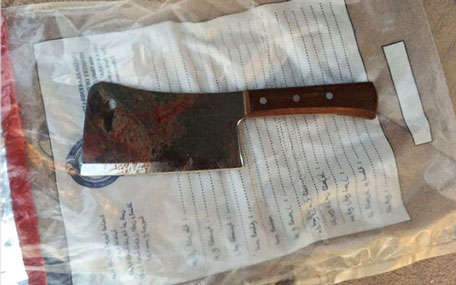 A 61-year-old Pakistani man attacked his 40-year-old Filipina wife using a cleaver because of jealousy.

The attack took place in Capital Mall at Zayed City in Abu Dhabi.The attacker hit the victim a few times, which almost killed her if it wasn’t for the swift intervention of the security guards, and transferring the victim quickly by the police ambulance to the hospital in a critical condition.In details, Colonel Dr. Rashid Mohammad Borshid, Head of the Criminal Investigation Department (CID) at the Abu Dhabi Police, said that the report came at 3:30 in the afternoon, stating that the victim (J.D.) was injured after (Q.Shah) attacked her, who later turned out to be her husband.

The victim works as a salesperson for a cosmetics products company at the Capital Mall.The suspect was apprehended immediately on the crime scene, and the used weapon was seized.

The mall security footage showed the suspect following the victim prior to the crime.Witnesses also testified that the suspect came to the victim’s work place and asked about her but could not find her.He tried reaching her by phone but she did not pick-up. He left the place and returned later to check where she was, so she confirmed that she was in the washroom.

The husband left the place to come back again with a cleaver he stole from a store and hid behind his back.He grabbed the victim by her hair and hit her multiple times before she could escape his grip at the last minute.

During the interrogations, the husband claimed that his wife was having an affair with an Asian security guard at the mall, and saw pictures on her phone confirming this affair.Hence, he stalked her and stole the crime weapon from a store at the mall to surprise her at her work place and almost kill her.

The police arrested the security guard suspected in having the alleged affair with the victim, according to the suspect, and the investigations are still ongoing to uncover more details.Colonel Dr. Borshid advised the public to be logical and solve such marital problems in a civilized manner, by using the family, psychological and social support specialized institutions, and avoid violence that results in bigger problems.