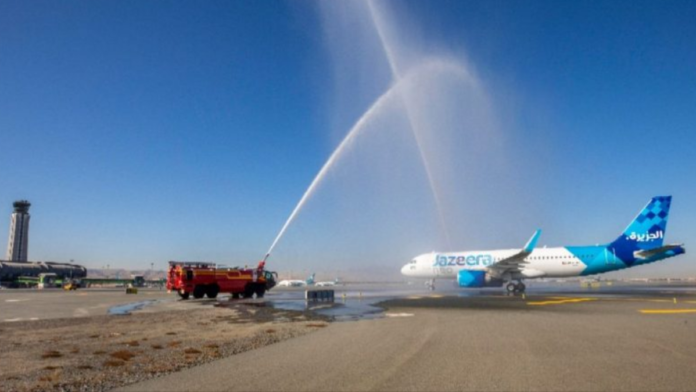 A plane of Jazeera Airways landed in Muscat from Kuwait, marking the operation of the Kuwaiti low-fare airline’s first direct flight to the Omani capital, media reports said Tuesday.

The maiden flight was received on Monday by water sprinklers at the Muscat International Airport in a gesture of welcome, Omani online newspaper Shabiba said. The privately owned carrier has scheduled a weekly flight from Kuwait to Muscat every Monday. Another Jazeera flight on the same day is scheduled to take off from Muscat to Kuwait.

Head of Commercial Operations at Oman Airports Samer bin Ahmed expressed happiness over the launch of the flights.

“We are seeking to make the Muscat International Airport a hub for regional and international airlines, given that the sultanate enjoys tourism potential and a promising investment environment,” he said.

“The launch of the Jazeera Airways will consolidate social contacts and tourism activities between the Sultanate and the State of Kuwait as leaderships of the two countries are seeking to boost cooperation links at all levels,” he added.

Oman resumed scheduled international flights on October 1, seven months after the country suspended air travel as part of a raft of measures to curb the spread of the novel coronavirus.