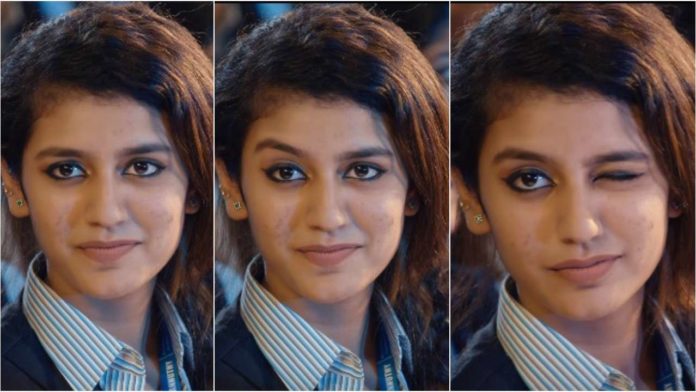 The 18-year-old debutante actor Priya Prakash Varrier is winning million hearts not just in India but in countries as far as Egypt and Pakistan. The girl is breaking the internet with just one ‘wink’ in the teaser clip of the upcoming Malayam film ‘Oru Adaar Love’ that has now gone viral.

The song ‘Manikya Malaraya Poovi’ is trending on YouTube and has already garnered over 1 million views and 50,000 likes in just 20 hours. What has sent the internet users around the world into a tizzy are Priya’s priceless expressions and winks that she has delivered in the seconds-long clip.

Her Instagram account has gained a whopping 1.3 million followers in a single day and Twitter is full with adorable tweets, making her a celebrity in moments. Not expecting such a response world-wide, Priya took to Twitter to thank her overnight fan-following and wrote: ‘Thank you so much for the love and support for #ManikyaMalarayaPoovi#OruAdaarLove. 4.3 Million views for YouTube & counting, 600k+ for me going bigger in Instagram. #MondayMotivation #PriyaPrakashVarrier’

The yet-to-be released movie is written and directed by Omar Lulu and is a story about plus two students, starring newcomers. The viral song has been composed by Shaan Rahman and sung by Vineeth Sreenivasan.

Outside the reel life, Priya is a first year B.Com student at Vimala college in Thrissur.

Priya’s mother revealed that the debutante was a little scared to step of the house after turning into a nationwide sensation overnight. “Within one night, her face has been splashed everywhere and people are recognising her. That’s not something anyone’s prepared for. She’s a very social, friendly person but she doesn’t know how to react to this,” Priya’s mother was quoted saying in The News Minute.