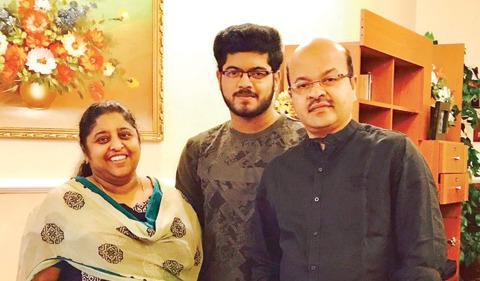 Anil Varghese Theveril won the amount in the Big Ticket millionaire draw held at Abu Dhabi International Airport on Thursday. Anil Varghese from Kerala is working in Kuwait at Kharafi National Company as an executive assistant for the past 26 years. He is staying in Abbasiya with his family. His Wife Renu is working with Badur Travels Company and his only son Rohit is studying in Kerala.

“I noticed that most of the winners were Indians, so I thought maybe I should try and hope that one day I will get lucky. I bought the tickets online,” he said.

Speaking to IndiansinKuwait.com, Anil told that he had already planned to settle down by next year. “Now this is one more reason for me to settle back in my native place”, Anil told.

Seven other winners were announced, each of whom took home 100,000 dirhams from Big Ticket. One of the winners was a Bangladeshi and another was a Moroccan. The rest were Indians, identified as George Kallarackal Mathew, Satish Thoghota, Baiju Pookottu Kuttappan, Irshad patel and Saidalavi Modeen Kutty Thottunkal.

According to data from two of the biggest raffle draws in the UAE (Abu Dhabi’s Big Ticket raffle to Dubai Duty Free’s Millionaire Draw), Indian nationals prove to be the most lucky.

In early April, a Dubai-based Indian driver hit a jackpot by winning 12 million Dirhams in Abu Dhabi. Another Indian had won a lottery worth 10 million dirhams also in Abu Dhabi in February 2018.