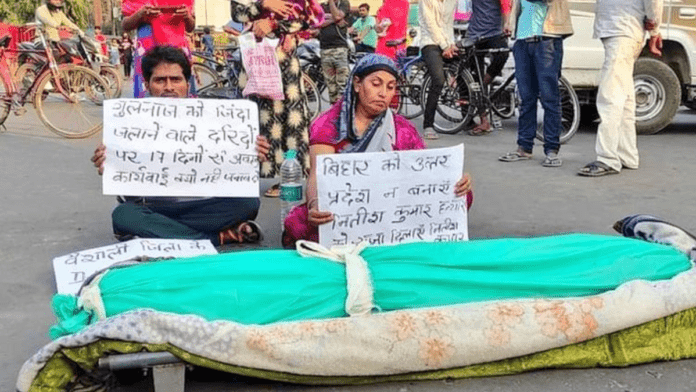 A girl in India’ Bihar was burnt alive after she refused to marry a Hindu boy. The incident took place in District Wishali of Bihar state where three Hindu men threw kerosene oil onto 20-year old Gulnaz and set her on fire. According to media reports, a boy called Satish had been harassing her to marry him for months.

In her video statement before her death she said that Satish had been forcing her to marry him and she clearly refused as she was a Muslim. The girl was set ablaze when she went to dispose off the garbage outside her house. The victim was reportedly dragged by three people including the father of the prime suspect, and set on fire. The girl had sustained around 75 per cent burn injuries.

The victim’s family alleged that Satish Rai and two others were involved in the heinous act. After the ghastly incident, the victim was admitted to a hospital where she succumbed to her injuries on November 15. A video of the victim naming her tormentor from the hospital bed has gone viral on social media. In her video statement to police, the victim said, “I was going to throw garbage outside around 6pm when Satish Rai, poured kerosene over me and set me ablaze.”

Two weeks have passed but no arrests were made despite the video statement. Due to police inaction in the case, family of the victim staged a protest by keeping the victim’s body on the road. The family has demanded the arrest of all three accused in the case.

Criticizing Modi government on social media the users have blamed that since the girl was Muslim and the boy was Hindu the case is not being treated as a case of ‘Love Jihad’. Some people pointed out that the accused belong to influential families making the police reluctant to take action.