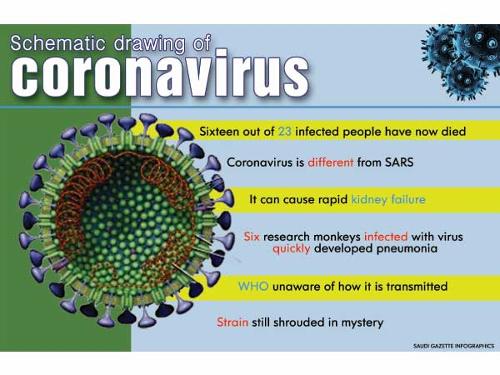 The Ministry of Health has taken all measures needed to ensure the safety of citizens and expats against the Coronavirus, said the ministry’s Undersecretary Mustafa Redha.

The official’s remarks were made in press conference on Wednesday, regarding reports issued by one of the World Health Organization (WHO)’s bodies that a South Korean citizen who arrived in his country coming from Kuwait was infected with the Middle East Respiratory Syndrome (MERS) or Coronavirus.

The ministry had raised the level of alert to contain any possible cases of the disease.

The ministry’s medical team also took samples from those who engaged with the patient, it said, adding that the samples were all negative.

The Yonhap News Agency had reported that ten people in South Korea who came into contact with the infected patient and showed symptoms of the disease tested negative.

Last Saturday, the 61 year old man was diagnosed with the first case of MERS in South Korea in about three years. after returning home from a business trip to Kuwait from August 16 to September 6. He was rushed to the emergency room of a medical center in southern Seoul upon his arrival at Incheon International Airport.

As of Tuesday evening, a total of 21 people who had come in close contact with the MERS patient, including those on the plane, such as flight attendants, passengers, medical staff and immigration officials, have all been quarantined in their respective homes and are being monitored for signs of MERS.
MERS is a viral respiratory disease with a fatality rate of 20-46 percent. It is caused by a novel coronavirus carried by camels and can be spread when someone is in close contact with a patient for a sustained period.

The first MERS case was recorded in Saudi Arabia, and it has since spread to other countries. As of June this year, the World Health Organization has reported 2,229 laboratory-confirmed cases. South Korea was hit by an outbreak in 2015, resulting in 38 deaths and 186 people testing positive for MERS.