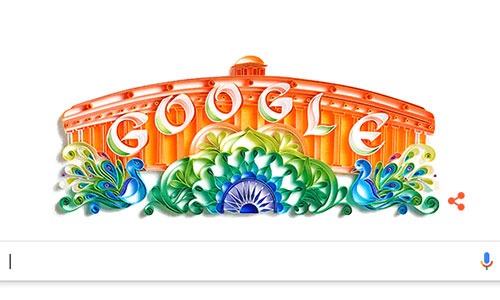 The doodle includes a motif of Indian Parliament, a symbolic wheel for the Ashok Chakra and India’s national bird peacock, all submerged in shades of saffron, green, white and blue.

The word “Google” is displayed across the Parliament House, made out of ribbons of the Indian tricolour.

“A unique paper-cut art style has been used to create a Doodle fit for the bold and colorful celebration of today’s events. The Parliament House depicted commemorates this day, this movement, and this triumph of independence,” Google said in a statement.

The special doodle has been designed and created by Mumbai-based artist Sabeena Karnik.

On last Independence day, Google had dedicated a doodle to the historic “Tryst with Destiny” speech of the country’s first Prime Minister Jawaharlal Nehru.