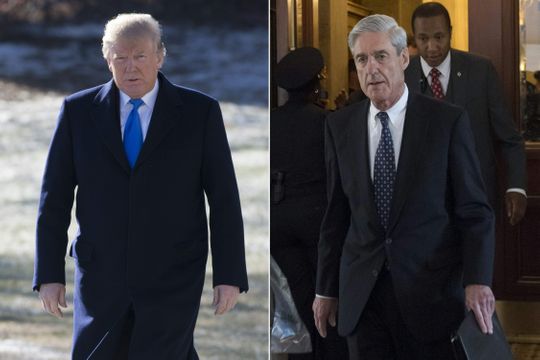 WASHINGTON – Top House Democrats said Sunday they will decide soon whether to pursue impeachment against President Donald Trump, while Trump attorney Rudy Giuliani argued that it would have been OK for the president to have accepted Russia’s help during the 2016 election.

“Obstruction of justice, if proven, would be impeachable,” said Rep. Jerrold Nadler, D-N.Y., chairman of the House Judiciary Committee, adding that he wants to see where the facts lead.

Giuliani, meanwhile, said there would not have been anything necessarily wrong with Trump and campaign aides receiving opposition research from the Russians about Democratic opponent Hillary Clinton. Giuliani also said Trump would have been within his rights to have Mueller fired, a key event behind claims that Trump tried to obstruct justice.

“There’s nothing wrong with taking information from Russians,” Giuliani said on CNN’s State of the Union. “It depends on where it came from.”

Trump aides and Democratic leaders took to the Sunday interview shows to debate the Mueller report, which said that there was no evidence of coordination between the Trump campaign and Russians who sought to interfere in the 2016 presidential election.

The report also said Trump and his campaign welcomed the help from the Russians, including stolen emails from Democrats and the use of social media to push fake news about Clinton.

The report listed 10 episodes in which Trump tried to interfere in the investigation, including his demands to aides at one point that Mueller be removed from his post. Mueller’s team said it did not determine whether Trump’s actions amounted to obstruction of justice in a legal sense, and suggested Congress might want to take up the issue.

Describing parts of the Mueller report as “warped” and “biased,” Giuliani said there was no collusion between the Trump campaign and Russia. He also said there would be no problem with a campaign accepting documents stolen by another country, even an adversary like Russia.

“It depends on the stolen material,” Giuliani said on NBC’s Meet The Press. He compared it to the 1971 media publications of the Pentagon Papers, Vietnam-era documents that had been stolen from the government by a third party.

“Legitimate opposition researchers never take help from foreign adversaries,” said John J. Pitney, Jr., who did research for the Republicans back in the late 1980s and early 1990s.

Now a professor of American politics at Claremont McKenna College, Pitney said that “if I had pulled that kind of stunt, my boss would have called the FBI and fired me.”

At another point, Giuliani defended Trump’s past praise of WikiLeaks, which did release stolen Democratic emails and thereby provided fodder for the Trump campaign. “They were putting out things that were true and very, very damaging to Hillary Clinton,” he said on NBC.

In a series of contentious Sunday show interviews, Giuliani also said the president had the right to fire Mueller because he had staff members who were pro-Clinton and biased against Trump. Had that happened, he said, Trump would have expected a new person come in and take over the investigation.

House Democrats disputed Giuliani’s analysis, and said they would hold hearings on the Mueller report, including one featuring the special counsel himself. Nadler, who wants to see portions of the report that were redacted by Attorney General William Barr, said Democrats will be meeting in the coming days to plan the next steps of investigation.

Rep. Adam Schiff, D-Calif., chairman of the House Intelligence Committee, told ABC’s This Week that impeachment is a difficult decision. One reason: Even if the Democratic-run House votes to impeach the president, it is highly unlikely the Republican-run Senate would vote to convict and remove him from office; it may not even take up the matter.

“I think what we are going to have to decide as a (Democratic) caucus is, what is the best thing for the country?” Schiff said. “Is it the best thing for the country to take up an impeachment proceeding because to do otherwise sends a message that this conduct is somehow compatible with office? Or is it in the best interest of the country not to take up impeachment that we know will not be successful because the Republican leadership will not do its duty?”

As he has throughout the weekend, Trump himself – who initially hailed the Mueller report as vindication – continued to attack some of its critical findings.

“The Trump Haters and Angry Democrats who wrote the Mueller Report were devastated by the No Collusion finding!” he tweeted on Easter Sunday from his Mar-a-Lago resort in Florida. “Nothing but a total ‘hit job’ which should never have been allowed to start in the first place!”

In another tweet, Trump predicted that upcoming hearings would hurt the Democrats politically: “The Radical Left Democrats do not want to go on to Legislate for the good of the people, but only to Investigate and waste time. This is costing our Country greatly, and will cost the Dems big time in 2020!”