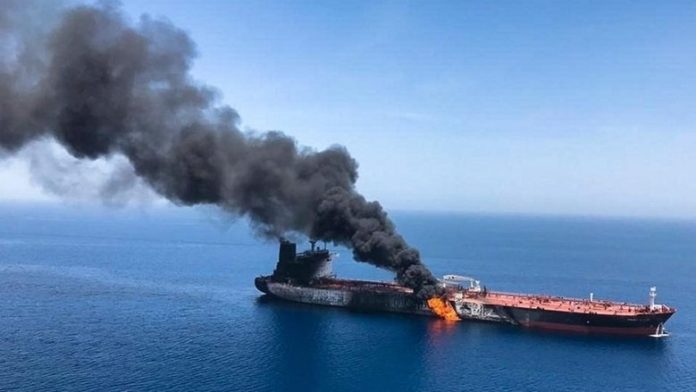 Couple oilers were on fire in the Gulf of Oman, UK maritime urges utmost prudence

Two oil tankers in the Gulf of Oman, near the important Strait of Hormuz, were reportedly stabbed on Thursday, the US Navy said, with one uncertain and on fire amid increased tensions between Washington and Tehran and a high-stakes visit by the Japanese prime minister to Iran.

“Today, June 13 at 6:03 am, the Front Altair, a Marshall Islands-flagged vessel, was bombed,” the statement said. “Three blasts on board the vessel were reported. The crew accommodated a passing vessel and no injuries have been declared.”

Oil rates jump after the attack: Oil prices fastened by about three percent after reports of an “attack” on two oil tankers in the Gulf of Oman.

Frontline states it’s Front Altair tanker on fire: The Norwegian shipping firm Frontline validated that its oil tanker Front Altair was on fire after an incident in the Gulf of Oman, Norwegian newspaper VG reported, quoting a corporation spokesman.

Whole 23 crew members were transported to safety at a nearby vessel, the spokesman added.

One crewman from the Kokuka Courageous was lightly harmed in the incident and received first aid on board the Coastal Ace.

US Navy assisting 2 targeted tankers: The US Navy’s 5th Fleet says it is assisting two oil tankers targeted in the “reported attack on tankers in the Gulf of Oman.”

The Bahrain-based force did not elaborate on who attacked what it described as two oil tankers. It also did not blame anyone for the attack.

The 5th Fleet said it had sent naval forces to the area to assist the two vessels. One has been identified as the MT Front Altair, a Marshall Islands-flagged crude oil tanker.

A private maritime intelligence firm says the Front Altair is adrift and on fire.

UK maritime urges extreme caution: A UK maritime protection group warned of an unspecified incident in the Gulf of Oman and urged “extreme caution” amid heightened tensions between Washington and Tehran and a high-stakes visit by the Japanese prime minister to Iran.

Iranian media declared – without offering any proof – that there had been an eruption in the area targeting oil tankers.

The United Kingdom Maritime Trade Operations, which is run by the British navy, put out the alert but did not develop on the incident. It said it was investigating.

Cmdr. Joshua Frey, a representative for the US Navy’s Bahrain-based 5th Fleet, stated his command was “aware” of a reported incident in the area. He refused to elaborate.

“We are working on getting details,” Frey said.

Benchmark Brent crude rose over 4 percent in trading, to over $62 a barrel after statements of the incident, according to quick market figures on Thursday.

Dryad Global, a maritime skill firm, preliminary classified the vessel involved as the MT Front Altair, a Marshall Islands-flagged crude oil tanker. The vessel was “on fire and adrift,” Dryad added. It did not offer a cause for the occurrence.

The maritime warning begins subsequent what the United States has expressed as Iranian attacks on four oil tankers nearby, off the coast of the United Arab Emirates. Iran has denied being involved.

The timing was extraordinarily sensitive as Japanese Prime Minister Shinzo Abe was visiting Iran on a high-stakes statesmanship mission. On Wednesday, after talks with Iranian President Hassan Rouhani, Abe hinted that any “accidental conflict” that could be sparked amid the heightened US-Iran tensions must be avoided.

Abe was to meet with Iran’s Supreme Leader Ayatollah Ali Khamenei on Thursday, the next and final day of his visit.

Abe’s Iran trip not intended to mediate row with the US: Official

Meantime, in Tokyo, Japan’s Chief Cabinet Secretary Yoshihide Suga, an uppermost government speaker, told reporters that Abe’s trip was planned to help de-escalate tautness in the Mideast – but not specifically mediate between Tehran and Washington.

His statements were allegedly meant to downplay and lower expectations amid unlikely prospects for Abe’s mission.