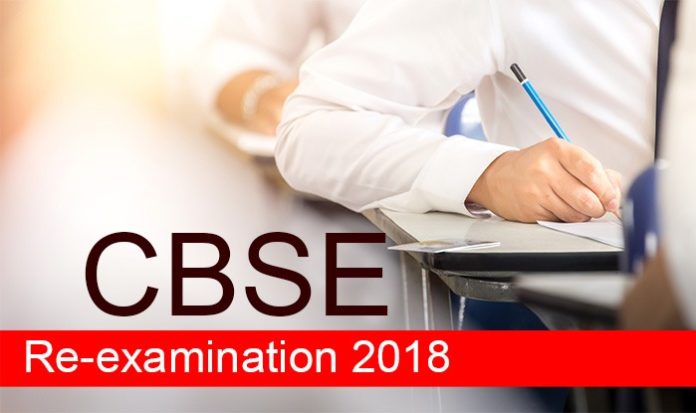 In a shocking move, Central Board of Secondary Education (CBSE)on Wednesday announced re-exam for Class 10 Math and Class 12 Economics over reports of people leak. One of country’s most renowned Education Board said that the re-exam would be conducted “to uphold the sanctity of the Board Examinations and in the interest of the fairness to the students”. The Class 12 re-exam for  Economics will be held on April 25 but a decision on the re-exam for the Class 10 Math paper will be held later, Union Education Secretary Anil Swarup announced today.

There will be no re-examination for Non-Resident Indians or NRI students, he said.

Students have been holding protests at Jantar Mantar in Delhi against the CBSE’s decisionto hold re-examination. Some also feel that other question papers were also leaked before the exams. People with direct knowledge of the matter in the crime branch said that people have access to exam papers were initially charging Rs. 35,000 for it. Some parents resold it to other parents to cover their cost, that is how the price of leaked paper fell from Rs. 35,000 to Rs.5,000.

The Delhi crime branch said that at least 1,000 students could have accessed the leaked papers.

Here’s everything you need to know about CBSE re-exam:

How the CBSE paper got leaked

According to the First Information Report, the CBSE received a fax last Friday, which said a man who runs a coaching class in Delhi was leaking question papers. The CBSE handed over the fax to the police a day later.

The fax that tipped off the board had alleged that the leaked paper originated from a man called Vicky, who runs a coaching institute in Rajinder Nagar in west Delhi.

A hand-written question paper of the Class 12 Economics examination had allegedly been circulating on WhatsApp a day before the examination. Many questions in this leaked paper were the same that appeared in the actual examination, suggested reports.

Prime Minister Narendra Modi who conducted an interactive session, “Pariksha Par Charcha” with the “exam warriors” before the Board examinations, expressed his displeasure over the CBSE paper leak. He dialed the HRD Minister Prakash Javadekar to express unhappiness and demanded a strict action against the perpetrators.

HRD Minister Prakash Javadekar said that it is not the ministry but the board that conducts these examinations and said, “2-3 papers had been leaked on WhatsApp 30 minutes before the exams and we have made a complaint to the Delhi police regarding it.” He announced that the government will now work on a robust system to make paper leaks impossible in the future. Saying that “nobody has the right to play with the lives of children”, Mr Javadekar assured that the culprits will definitely be caught.

“We are working for the children. We will also announce the dates very soon. Nobody needs to worry. We have taken a decision in favour of the children,” Ms Karwal said.

What Opposition said on CBSE re-exam

The CBSE exam leak gave opportunity to the Opposition to lash out at the government.Congress chief Rahul Gandhi tweeted: “How many leaks? Data leak! Aadhar leak! SSC Exam leak! Election date leak! CBSE papers leak! There is a leak in everything, the ‘chowkidar’ is weak,” Congress President Rahul Gandhi said in tweet.

On March 15, the Delhi government said it received complaints from the CBSE about the Class 12 Accountancy paper being leaked. The CBSE, however, denied there was a leak. It issued denials again when students reported that the Economics paper was leaked.

“I really feel sorry and sad for the students who have to give their exams again for no fault of theirs. Responsibility shud be fixed n strict action shud be taken against those responsible,” Delhi Chief Minister Arvind Kejriwal tweeted.

Samajwadi party leader Akhilesh Yadav said, “Election dates, sensitive information and data and persistent leaks papers for various exams are the result of government falling into wrong hands, and the mismanagement of the system. Why do children and youth of the country have to suffer because of others’ mistake?”

After receiving complains, the police started its investigation with the questioning of people, mostly students, who had been able to access the handwritten question papers.

“We have received snapshots of the handwritten paper circulated through WhatsApp from the complainant. We are trying to ascertain the source of these messages. Since WhatsApp messages are end-to-end encrypted, we are facing a bit of difficulty in tracing the source,” said an officer privy to the probe, according to news agency Press Trust of India.

CBSE controller was also quizzed for about four hours. The case names the head of a coaching centre in west Delhi’s Rajinder Nagar.

Petitions have been filed to protest against the CBSE re-exam:

“Many students have other plans for other events and some students families are looking to migrate from one place to another and have already begun their packing, hence, it makes it impossible for them to write their exam (sic)”, said the petition filed by Sree Charan.

Some petitions also question that if paper leak happened in Delhi then re-exams should also be held only in Delhi.

Several Bollywood celebrities including Farhan Akhtar, Vivek Oberoi and Emraan Hashmi expressed their disappointment over CBSE paper leak and the re-exam decision. “Feel terrible for all students who have to re-sit their exams for no fault of their own. So unfair and unfortunate. Wish them strength to get through this time,” tweeted Farhan Akhtar.

What are the dates for CBSE Maths and Economics paper

Class 10 CBSE re-exam for Math will be announced after investigation and if re-exam happens, then it will be held in Delhi and Haryana in the month of July. There will be no re-examination for Non-Resident Indians or NRI students.

Who all need to write the CBSE re-exam

For Class 12 Economics exam, candidates who had registered for the March 26 exam will have to re-sit.