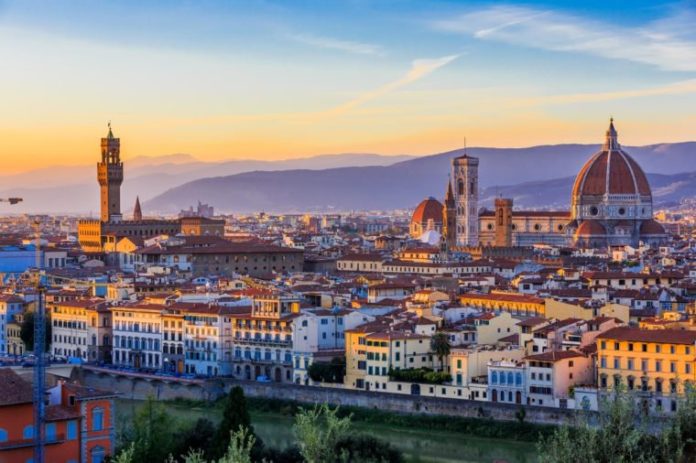 Best country Where Everyone Wants to Travel to This Year

What do you get when you combine pizza, pasta, gelato, and wine with thousands of years of architecture and some of the greatest works of art in the world? According to a TravelSupermarket research survey reported by Travel and Leisure, that’s the winning combination to make Italy the most searched for destination on the globe. Ready to see why this stunning country is at the top of everyone’s travel list for 2019? Here are a dozen of the top attractions and cities to add to your Italian bucket list, whether you’re ready to start planning a trip to Italy right now or just want to dream about la dolce vita.

It’s hard to talk about visiting Italy without starting at this classical city where contemporary culture stands shoulder to should with ancient architecture. Landmarks of the “Eternal City” include the Coliseum, Palatine Hill, the Trevi Fountain, the Pantheon, and Piazza Navona, and you can even travel to another country by crossing into Vatican City to see the Sistine Chapel. Don’t miss strolling with a gelato in hand to the Spanish Steps on your way to the flowering gardens of the Villa Borghese. Leave time to explore the smaller neighborhoods, eat Rome’s famed pizza, and people watch in the piazzas with a glass of wine. Rome is also one of our favorite destinations for breathtaking views on a Mediterranean Cruise.

For art and culture lovers, Florence is a must visit. Start at the Galleria Accademia to gaze at the impressive 17 foot high Michelangelo masterwork, David, whose detailed sculpture makes all others pale by comparison. Then move on to the Uffizi Gallery for rooms full of priceless Renaissance masterpieces, including works by Da Vinci, Botticelli, Michelangelo, and Caravaggio. Then stroll across the Ponte Vecchio bridge for panoramic views of the Arno River. Surrounded by 22 acres of gardens, olive and lemon groves, Villa La Massa, is located just outside of Florence but feels worlds away. Built in the 16th century for a member of the Medici family, it features authentic Florentine decor and serene Arno River views. Get ready to mangia, eat up, in Florence, which is one of the best cities for foodies in the world.

A safe, car-free, walker’s paradise of canals and waterways, this Italian city is perfect for exploring, and wandering, on your own—half the adventure here is simply getting lost on your own along the winding alleyways and discovering tucked-away neighborhoods. (Of course, you’ll want to also leave time to see Piazza San Marco, Doge’s Palace, and a few of the world-class museums). In the evening, join the convivial crowds along the Rialto for Apertivo hour, when locals sip goblets of “spritz” (Aperol and prosecco) or regional wines accompanied by small bites or “cicchetti” at a small bar (bàcari)—a perfect time for solo travelers to find a dining companion if they want. At night, retire across the canal to the small island of Giudecca where the Belmond Hotel Cipriani which boasts a saltwater pool and rose gardens feels like a resort, but with views of San Marco. Even if you’re not staying here, stop by the sun-kissed cocktail lounge for their signature Bellini, a mix of white peach puree and local prosecco.

There’s a vibrant energy to this buzzing business center known for its high-end shopping and fashion-forward designers. However, it’s not all commerce in this northern Italian destination. Head to the roof of the magnificent Milan Cathedral, the third largest in Europe, for gorgeous views of La Scala theater and over the downtown. Book tickets in advance to see “The Last Supper;” Leonardo’s Da Vinci’s masterwork graces a wall of the unassuming Convent of Santa Maria delle Grazie; although you can only spend 15 minutes with the massive mural, the experience will likely stay with you for a lifetime. Check into the Baglioni Hotel Carlton for a chic stay right in the heart of the city’s vibrant shopping and dining heart.

Located in northern Italy, right below Milan, this azure glacial lake may be the deepest in Europe, but it’s much better known as the vacation destination of choice for style setting globetrotters, including George and Amal Clooney, who have a home here. Enjoy the stunning lake and mountain scenery here from Villa d’Este, the world-famous resort hotel overlooking the gorgeous lake is set amid 25 acres of luxuriously landscaped park with a legendary floating swimming pool that sits directly on the lake. Known as “Hollywood on the Lake” everyone from Greta Garbo and Elizabeth Taylor to George Clooney has stayed here, and it was the site of Emily Blunt and John Krasinski’s destination wedding. For even more romance, don’t miss these gorgeous European destinations.

If Italy had a “Hamptons,” it would undoubtedly be the Amalfi coast, a rugged stretch of coastline where breathtakingly beautiful hotels sit practically atop one another and overlook the crystal-clear blue waters of the Mediterranean. The result? Some of the most unique and exquisite beach towns you’ll ever see. While the Amalfi Coast is home to several small Italian villages, one of the most romantic is without question Positano, where you’ll find Sireneuse Hotel, which boasts beautiful views of the sunset and is home to Michelin-starred restaurant, La Sponda.

Wine anyone? In Tuscany, it’s hard to drive even a few minutes without encountering picturesque vineyard tucked between hillsides overflowing not with grape vines and olive trees. Stands of manicured Cypress Trees lead the way to quaint farmhouses and ancient walled towns, like Siena, whose golden-hued pedestrian city center is perfect for strolling and exploring. Spend a day tasting the local vino, then spend the night sampling pasta delicacies at one of the many family-owned eateries that dot the surrounding countryside. These gorgeous wineries around the world are definitely worth a visit.

In A.D. 79, Pompeii was a thriving city filled with citizens of the Roman Empire working, playing, and going about their everyday lives. Then Mt. Vesuvius erupted, completely burying the city in lava, ash, and rubble, completely catching its residents off guard. After the eruption, the entire community lay hidden, and perfectly preserved, under tons of volcanic residue for almost 1,700 years before being discovered in the mid-18th century. Today, a visit to Pompeii gives you a glimpse of what life was like centuries ago as you walk amid the perfectly preserved remains of daily life.

“Matera, in the southern Italian region of Basilicata, is now firmly placed on the map for cultivated travelers after being awarded the accolade of 2019 European Capital of Culture, ” enthuses Roberta Possenti, Managing Director for Southern Europe of Preferred Hotels. Matera, which is near Bari, at the top of Italy’s “heel,” is an ancient city steeped in history with highlights that include the UNESCO World Heritage Site Sassi, cave dwellings and rock churches that are more than 7,000 years old. Having remained relatively unknown for many years, the city makes visitors feel as though they are the first to discover this magical town, adds Possenti. The newly opened Kalidria Hotel & Thalasso Spa, located near the coast just a 45-minute drive from Matera, is a tranquil base from which to explore the area.

Few destinations in Italy, and perhaps the world, conjure myths of romance the way this beautiful island does. A 45-minute boat ride brings visitors from Naples to Marina Grande; from here take the funicular to Capri Town and scenic Piazzetta Square, always bustling with visitors. Continue across the island to the southern shore and Marina Piccola for the island’s largest beach. It’s also a short hop from Marina Grande to visit the museum at lovely Villa San Michele. And don’t miss the legendary Blue Grotto (Grotto Azzurra); motorboats can take you right from the marina to visit the luminescent cave where you’ll transfer to a rowboat for a visit to the sunken cave.

It’s said you “See Naples and Die,” since its beauty is so overwhelming, and although we don’t take it quite so literally, it’s setting stretching along the Tyrrhenian Sea with views of Mt. Vesuvius towering the east, the sparkling Bay of Naples spread out in front, and the glittering isle of Capri in the foreground, is definitely impressive. The city is home to four elaborate castles plus a palace in addition to myriad churches and cathedrals, and several impressive museums, adding substance to its impressive looks.

The largest island in the Mediterranean has been a cultural crossroads for 3,000 years. Highlights of this Italian island include the capital city of Palermo and its 12th-century duomo dating back to 1174; the gorgeous, ancient seaside town of Siracusa. History buffs will marvel at the Classics such as Valle Dei Templi, one of the richest archaeological sites in the region; the Greek temples in Segesta; and, the breathtaking mosaics of the Roman Villa del Casale. Travelers’ palettes will be indulged with tastings in Marsala wine country; sampling typical Sicilian pastries baked by a silent order of nuns at the Abbey di Santo Spirito. Of course, no visit to Sicily would be complete without taking in Mt. Etna, along with the vineyards and pistachio groves planted in the lush soil that surrounds the volcano. Read on for the 15 best places to visit in 2019 according to travel experts.

New Zealand now the most powerful passport in the world

Indians who make there trip to Bhutan will now need to pay extra. Below are the explanations

Number of Nations that provides Indian Arrival Visas in 2020

Things To Do In Reno, Nevada