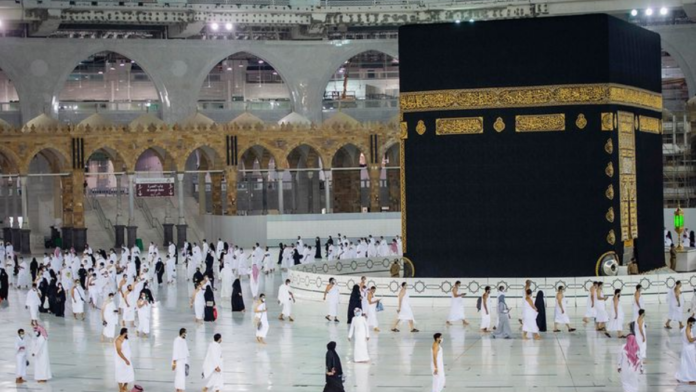 Around 10,000 international pilgrims are arriving in Saudi Arabia on Sunday, marking the start of the third phase in a gradual plan to resume the minor pilgrimage after suspension of around eight months.

The first flight carrying foreign pilgrims from Pakistan is scheduled to land at the King Abdulaziz Airport in the Saudi city of Jeddah at 4pm, Saudi newspaper Okaz has reported. A second flight will arrive at 4.30pm from Indonesia at the same airport.

“All health precautions are in place,” head of the airport Essam Fouad said, referring to measures against the spread of the new coronavirus.

As many as 20,000 Umrah pilgrims and 60,000 worshipers will be allowed to perform prayers at the Grand Mosque in Mecca from Sunday On October 4, Saudi Arabia set into motion a phased plan resuming the Umrah after suspension of about seven months prompted by the spread of COVID-19.

The first phase got off the ground with limited numbers of pilgrims from inside Saudi Arabia amid a raft of precautions against COVID-19. The second went into effect on October 18, allowing about 40,000 worshippers and 15,000 pilgrims per day into the Grand Mosque. The third stage for foreign pilgrims, beginning Sunday, will be implemented amid strict health measures including limiting the ritual to Muslims aged between 18 to 50 years.

The eligible pilgrims are required to show a test result conducted 72 hours at most before arrival proving they are free of COVID-19. Muslims, coming from abroad to the kingdom to perform the Umrah, are allowed a 10-day stay, Saudi media reported Sunday.

Pilgrims and visitors from within the Kingdom and abroad will be allowed to perform Umrah and prayers at the Two Holy Mosques at full capacity in the fourth and final phase of the gradual resumption of the services that were suspended following the outbreak of coronavirus nearly eight months ago.